This past Saturday my Sweet Babboo and I did an overnighter in Sharonville, Ohio which is considered part of Cincinnati.  We stayed at the Hyatt where John had been given a free night.  He wanted to stay overnight so that he could attend the Half Price Books clearance sale at the Sharonville Convention Center both on Saturday and Sunday.  The Hyatt is actually attached to the convention center so he got to wander over there whenever the mood struck him.  This was his third year going to the clearance sale but his first year staying at the Hyatt.  I decided to go along with him to help him find things he was looking for at the sale.  It became sort of a mini vacation for us.  The fact that Keepsakes cross stitch shop is in Sharonville was icing on the cake   : )

I will tell you all about my visit to Keepsakes in another post.  For now I have a dirty little secret I'd like to share and to ask for help, assuming I need any.

John bought me several items while we were at Keepsakes including Lizzie Kate's 4 Seasons charts. I was never really interested in stitching these until I saw a couple people on YouTube showing their progress stitching them, but what really clinched it for me was seeing the model hanging on the wall at Keepsakes.  John really liked the model as well and I told him that this design would be my next project.  I started stitching it on Sunday evening.  This is how far I've gotten with the first design in the series.  I will, of course, be stitching all four charts together on one piece of fabric. 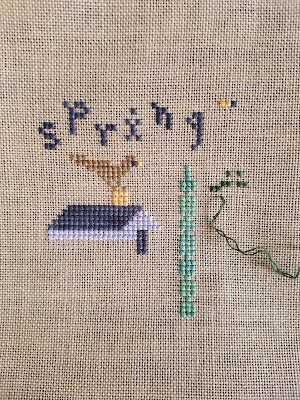 Nothing out of the ordinary here, but it's when I turn it around to the back side that my dirty little secret is exposed. 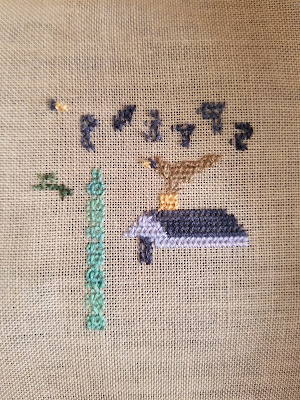 Knots.  If I have confetti stitches, or just a few stitches in part of a design, I secure these particular bits by making a knot.  If I'm using hand dyed floss, as is the case in this design, I both start and end with a knot.  Running the floss under a few stitches to secure these very small bits at the start and again at the finish produces a big lump in that part of the design which just won't do.

My knots are not extremely huge or noticeable from the right side.  I have never really been concerned about them in the past when stitching items I knew would be made into small pillows or even flat folds, but this project will be framed and I'm not sure if the knots will cause any problems.  They are lacemakers knots made with two single strands tied right over left, left over right, and then right over left again.  It is impossible for them to work themselves loose.

I probably would never have made this confession about my knottiness if not for the fact that the house in this design has 11 windows.  Each window consists of three stitches.  The hand dyed floss will not really show up in these windows so my plan was to start them off with a loop start and finish them with a knot.  Seems like an awful lot of knots though and I'm wondering if there might be a better way.  I know I can start one window and carry the floss across to the next, and then to the next, and so on, but I'm concerned that the black floss will show through the pale lilac floss on the right side.  I did some research into the pin start.  Interesting concept, but not when you are stitching with two strands.  Of course for these small windows I could use just one strand of floss and double stitch each leg.

Any thoughts?  The knots really just cushion themselves into the stitch(es) surrounding them so maybe I'm making much ado about nothing and embarrassing myself for no reason.  Will anyone else dare to admit that they use knots?  Perhaps we can get t-shirts made ... Knotty Girls Unite, or I'm a Knotty Girl!

It's been quite busy around here, but then again there doesn't seem to be much of anything getting done!  I don't know if anyone else feels this way but I have SO much to do that I am just overwhelmed by it all.  The tasks appear insurmountable.  I know, I know ... take things a little at a time.  One box per day.  One drawer per day.  Great advice, I'll grant you that.  Unfortunately all the little pixels just meld into one huge picture & I need to go have a lie down.  Sigh!

Some stitching is getting done, if nothing else.  I sort of finished my Winter ABCs by Little House Needleworks, the pattern having been gifted to me by Debra Scott. 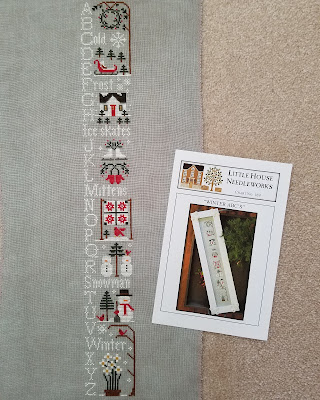 I say I sort of finished this because I still need to stitch 20 or so blasted French knots.  They are unfortunately stitched over white motifs using either red or black floss.  I say unfortunately because after several failed attempts at getting them "just right" (you know me & my curse of just rightness) the black &/or red dye leaves little discolored areas amidst the white floss which, of course, will not do.  I have given up & will instead substitute little seed beads when I can find the right size.  I guess a three-year break in stitching made me forget my once-upon-a-time vow to carefully look at patterns before stitching them just in case those evil French knots are included.

This next project is an actual finish ... no "sort of's" with this one! 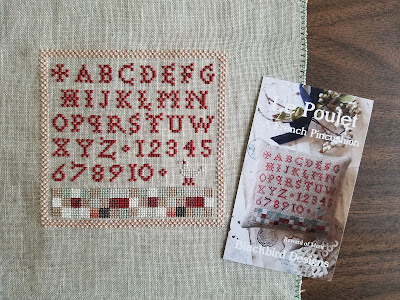 I have had this little chart in my stash for several years & have always looked forward to stitching it.  I am happy wit how it turned out.

This is my next project ... Lizzie Kate's A Little Stitch. 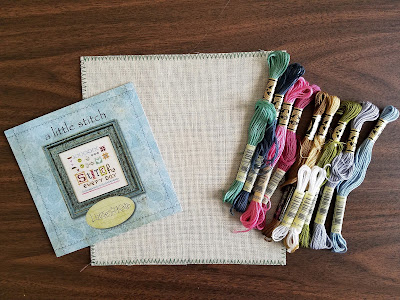 I started stitching it last night & it will stitch up quickly.

I am kind of between a rock & a hard place in that I have several boxes full of linen but I don't want to open them to see what I've got & to match it up with a design I want to stitch.  Therefore I keep stitching projects that either already have the fabric included with them or I order new fabric.  Argh!!!  I don't want to open boxes ... boxes of fabric or boxes of other things ... because when we moved from our beloved farmstead on the edge of heaven I made sure I packed things to withstand Armageddon. That is how I describe it.  I pack things inside boxes in such a way that if the movers drop them off the truck or down a flight of stairs nothing will be damaged.  It takes a lot of work to pack this way and I just want to avoid having to repack if possible.  I know what you're thinking ... fabric isn't going to be damaged if a box of it is dropped off a truck or down a fight of stairs.  I know.  Still, it is packed "perfectly" & I just don't want to have to go through packing it again.  Yes, I'm a nut case.

Speaking of moving, nothing to tell you on that front.  I did find three possible rental homes in Lexington but never received a call back when I inquired about them.  You would think a professional realtor with a home to rent would respond to someone with an interest in that home, even if just to say "I'm sorry, it's been rented."  So for now it looks like we might be in our current rental until we move to a cemetery.  I hope not.

Some of you would say it's a beautiful day here today ... a sunshiny 75 degrees.  A slight breeze, not a cloud in the sky.  Tomorrow the prediction is for 78 degrees!  Blah!!!  Monday looks a little better ... 44 degrees with a chance of rain/snow.  Come on Monday!!!

You may have guessed from the continued Christmas/winter theme that I still cannot access my laptop.  I did take it in to Staples & a very personable young man was actually able to fix it for me while I was there.  I brought it home & it worked for about 20 minutes & that was the end of it.  I will need to get a new laptop one of these days.  In the meantime it is going to be Christmasy & wintery when you come to visit me.
Have a wonderful week everyone!!! 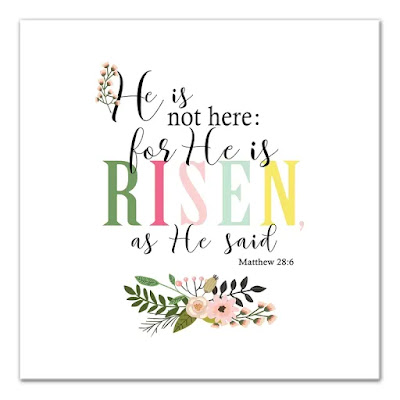