Last Week's Finish, A New Start, and Signing Your Work 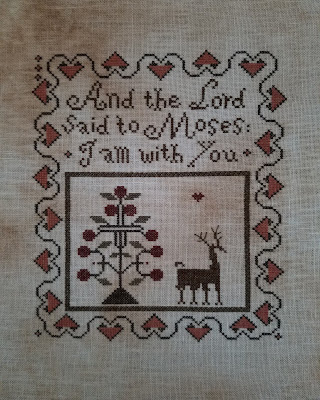 And here is my new start ... Winter ABCs by Little House Needleworks. 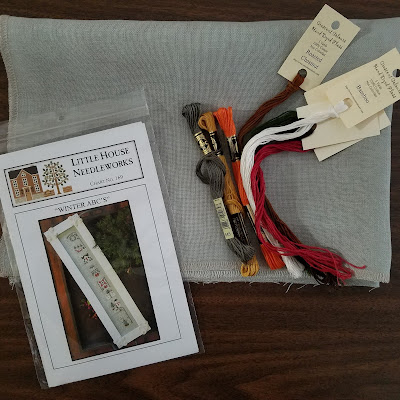 This pattern was gifted to me by Debra Scott when I admired her finished project on Instagram   : )   I am using the suggested 32-count Vintage Tundra linen and I pulled the suggested Crescent Colours and DMC colors although I think I might just use all DMC.

We have had two winter storms recently.  One last week and one just yesterday.  Last week's was rather impressive for this neck of the woods.  Yesterday's did not end up being as severe as predicted but it was nice to see the snow falling anyway.  I will be sorry when it's gone.

Incidentally, winter will remain on my blog until I can take my laptop to the shop to have whatever is wrong with it fixed.  It refuses to connect to the internet even though it is connected to the Wi-Fi.

I wish you all a wonderful week!

A New Ornament, A New Start, A Nightmare, & A Surprise

Happy Sunday one & all!

Last week I worked on Chessie & Friends by Chessie & Me.  This is another ornament I had kitted up from 2014.  I didn't realize there were Symra cross stitches, round eyelet stitches, & star stitches in the design, but of course I should have known ... Chessie & Me ... lol!  I am glad I persevered. 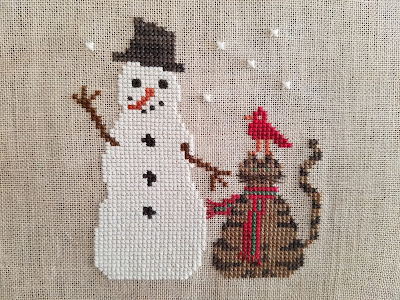 The only change I made was I substituted DMC Ecru for the suggested WDW Angel Hair to stitch the snowman.  My skein of Angel Hair was rather peachy/apricot looking.  Definitely not a snowman color. 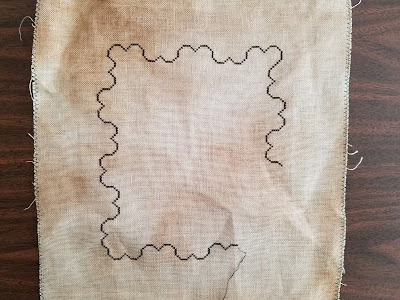 The nightmare is my ongoing dental woes.  I am still making payments on a $25,000 bill & will be doing so for at least the next year.  The dental work was done this past August.  There have been problems since the work was finished.  I have been going back to the dentist almost weekly.  She had nearly 500 positive online reviews & only one that was negative, & the negative one was simply from a woman who was upset that she was charged for a consultation.  No reviews mentioned how forgetful she is, or how she takes it as a personal insult when you try to explain that you are having problems.  Last week her husband, who is also in the practice, acted as mediator between the two of us.  When she finally calmed down I wasn't going to start her up again when she insisted I had some of these problems when I first came to see her   : (   As things stand now I need to locate another dentist for a second opinion because she & her husband both say they have ever heard of anyone having the problems I am having.  Her husband said that if another party can shed light on why I'm having these problems they will do whatever it takes to fix them.  Of course before the meeting was over the dentist had to pipe up with one last snotty remark which was "You might just have to learn to live with these things."  Your prayers will be greatly appreciated.

On a happier note, I thought our lease was up at the end of June, but I looked at our rental agreement last week & yo-ho!  It's up at the end of May!  Quite a surprise for me!  This is a very good thing but also a stressful one.  Finding a decent, affordable rental is like finding a needle in a haystack.  I would LOVE to get out of Kentucky but the dental issues will most likely prevent that.  We would just stay put if it wasn't for the mold & fungus issues in the Ohio River Valley.  Your prayers will be greatly appreciated for this as well.

In Search of a Little by Little Design Company Sampler Chart

I would like to purchase or borrow a Little by Little Design Company sampler chart. Unfortunately I do not know the name of the design or have a photo.  It features a simple floral border on the top and right and left sides but not on the bottom.  The bottom has a large two-story darker pink house with three chimneys.  To the left of the house is a tree with a bird on top. To the right of the house is a large pink flower and what looks to be a brown dog.  Straight across the top underneath the floral border there is a line of lowercase letters from A through Q.  The verse reads " If I am right oh Teach my Heart Still in the right to stay If I am wrong Thy grace impart To find that better way" ... and then there are the stitcher's initials with the words "her work in the year of Our Lord" and then the year.  Does this sound familiar to anyone?  Does anyone have the chart who would be willing to sell or loan it to me so I can stitch it?

Not One, Not Two, but Three! 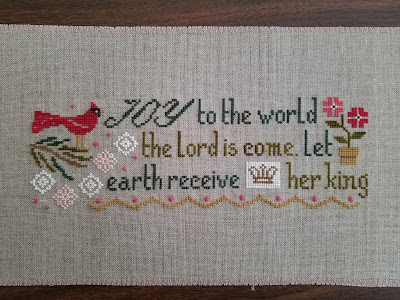 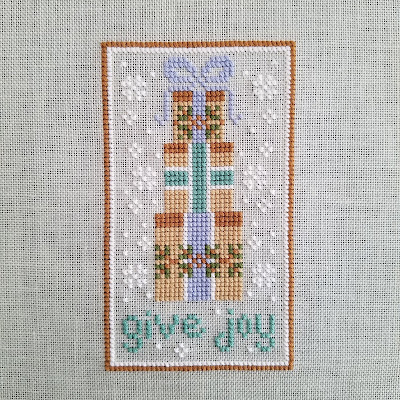 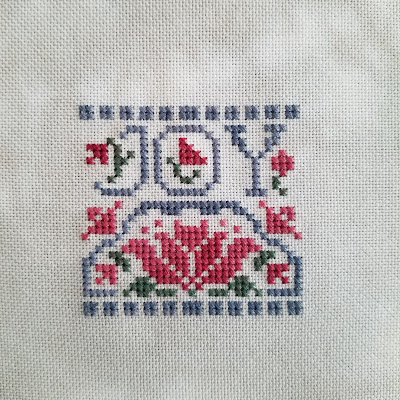 Thanks again to everyone who helped me with my star stitches for Joy to the World.  I decided to use Robin in VA's suggestion and stitch them using one strand twice to make a stitch with two threads. Perfect!

Last night I started stitching my third ornament although I wonder if the A Little Snow design by Lizzie Kate might actually be an ornament. Hmmmmm.  Last night I started stitching my third or fourth ornament which is Chessie & Friends, a Chessie & Me design from the 2001 JCSCO issue. This is one of the designs I kitted up 3+ years ago. I think I'm going to try to work on stitching these designs first.  That's the plan for now anyway   : )

While pondering what to do with my Joy to the World project (thank you, everyone, for your suggestions), I decided to start an ornament.  I think on Instagram, or somewhere, there is some kind of "stitch 12 ornaments in a year, one for each month" group thingie.  I haven't been able to find it ... but since Joy to the World is having a time out at the moment, I started an ornament.

Before I stopped stitching three years ago, I had kitted up several projects in individual plastic baggies ... working copies of the charts, the suggested fabrics, and the suggested threads or DMC equivalents.  I went through these baggies the day before yesterday.  Isn't it interesting how much your tastes can change in three years?  I looked at some of those designs and thought, "I wanted to stitch this???"  And then I took everything out of those baggies, tossed the working copies, and filed the fabrics & threads ... lol!

This design called to me to stitch it first.  I think it's the color palette.  I've been stitching a lot of Christmas reds and greens lately.  This design is from the JCSO 2014 issue ... Give Joy by Country Cottage Needleworks.  I'm using the suggested fabric, 32-count waterlily linen ... a pretty, pale mint green color.  I chose to use the DMC equivalents. 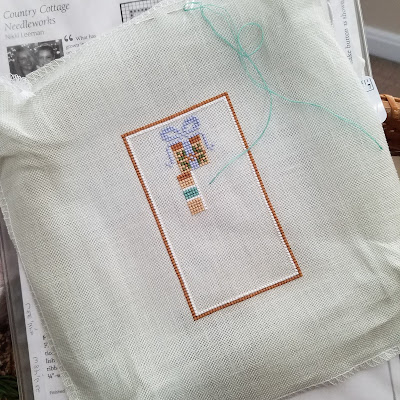 You may remember me mentioning once upon a time that I used to be a design contributor to a cross stitch magazine many years ago.  Yesterday I opened a box marked Bobbin Lace Supplies that has been sealed for 10 years.  Literally 10 years.  I was surprised to find some old cross stitch pieces in there that were stitched back in the early 80s.  I was also happy to find three cross stitch magazine issues that contained my designs. 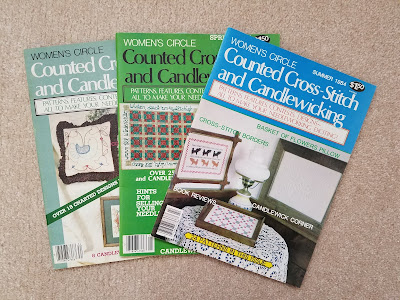 I will share these designs with you here.  Please remember that I was a young cross stitcher at the time, and there was no such thing as cross stitch design software back then. 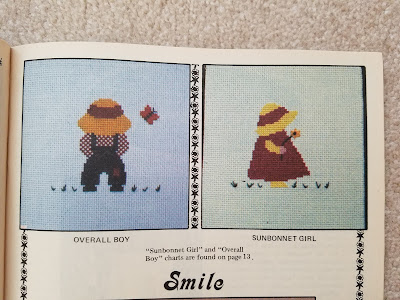 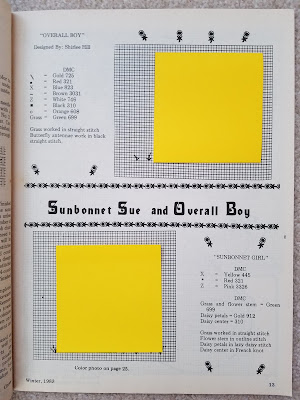 The Spring 1984 issue really surprised me!  I remembered having designed a Bible bookmark, but not this one ... and I had totally forgotten about the Peek-A-Boo, Happy Easter to You design! 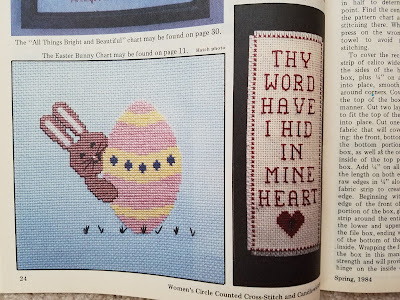 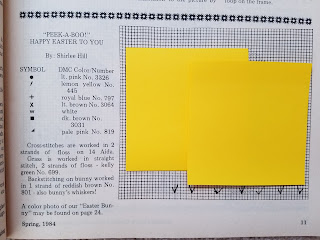 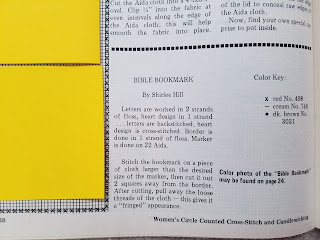 The Summer 1984 issue contained my quilt design potholders.  I was quite proud when the powers that were used them as part of a photograph display for a mailing promotion to try to get more subscribers   : )   I know I saved that mailing promotion.  It's somewhere. 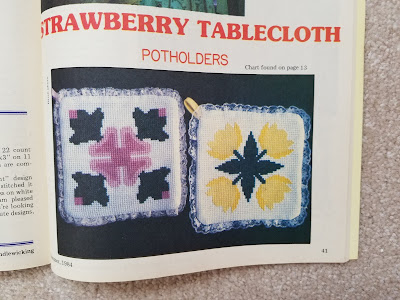 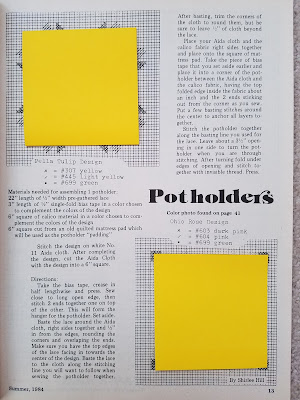 I had given the finished potholders to my mother when the magazine returned them.  Many years later she gave them back to me, and I still have them. 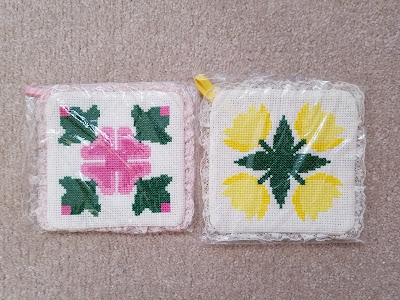 I have no idea what became of any of my other completed designs   : (   That little Easter bunny would have come in handy right about now!  Perhaps they will surface along with other magazines and designs, and the mailing promotion, when I open another box.

I can't imagine what I might find in the boxes that have been sealed since 2004!

I am so thankful for the pencil suggestions in response to my last request.  Little did I know I'd be in need of assistance again so soon.

I hadn't noticed that Joy to the World has star stitches.  The stitches themselves are not a problem to make, but do I make them with one strand of floss or with two?  I consulted YouTube and half the tutorials there say two strands and the other half say one.  Since I'm stitching the rest of the design with two strands I am assuming two.  However, where do I secure the ends?  I am using hand dyed floss.  I tried tying a knot with two strands, which actually results in four strands making the knot, but this is quite lumpy.  There's really not a lot of stitching on the back side of the star stitches for me to weave the ends under.  I am supposed to place a star stitch in each bottom curved portion of the gold swag and then randomly about the design.  Please see the photo.  Any suggestions?  Is there perhaps another stitch I can substitute for the star stitches? 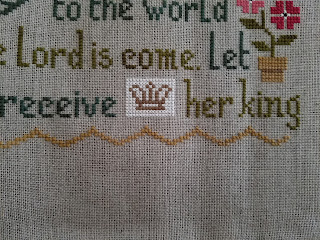 I have been happily stitching away on my Joy to the World design by Lizzie Kate but alas, I have encountered a problem with my linen.  There was a large slub which I knew from the start would be in the stitching area.  I did my best to pick it out.  I'm usually successful when I do this, but this time not so much.  The slub did get smaller, but the fabric dye did not soak through all the fibers and therefore the remainder of what's left is lighter, even white, compared to the surrounding fabric.  Your eye is immediately drawn to it.

I tried to plan for part of the stitching to cover the slub.  Obviously I failed.  Can anyone suggest a way I can somehow darken this area a bit without ruining the surrounding linen and the cross stitches? 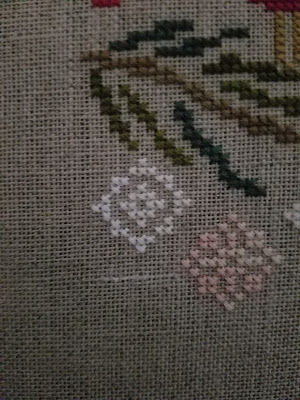