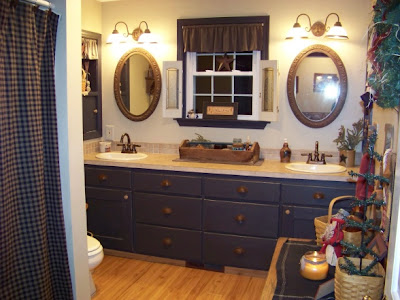 The above photo is not a photo of my bathroom.  My bathroom is similar ... it has a toilet & a shower & a sink ... but it is rather untidy at the moment so I am instead using a bathroom photo that I pulled off the internet.  It's a pretty nice looking bathroom, isn't it?  I wouldn't mind having a bathroom like this.  Bathrooms are not the subject of this post, however.  The subject is mirrors.

Last summer, I wrote a blog post titled Perfection in a Yarn Shop.  You can click on the title & read the post if you are so inclined.  I ended that post by stating that I was thinking about knitting covers for all the mirrors in my house.  I did not knit those covers.  Therefore, I have no one to blame but myself for what I am now going to share with you.

Last night when I stepped out of the shower, I caught a glimpse of myself in the bathroom mirror. 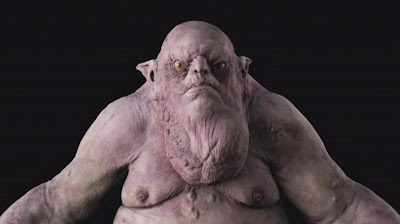 I was quite dismayed.  I knew that I had put on a bit of weight over the past year.  I wasn't blind to the signs ... I just chose to not think about them.  Elastic around the legs of my underwear cutting off my circulation. Socks splitting at the seams.  A second set of breasts underneath my armpits.  Needing to lift my chin with both hands while John secures a necklace clasp for me, then asking him where the heck the necklace is when I don't see it & him saying "Lift your neck skin ... it's under there."

I have no idea you even look close to that pictures...and you know what...even if you did it would not matter, it is what is in your heart that counts.

How's the afghan coming along?

I thought it was my dryer

OMGosh. Too funny. I think I saw you in my mirror! Lol

Oh, you are too funny, Shirlee!! Where on earth do you find these hilarious images?? Wonderful post--thanks for making me smile on April Fool's Day :)

I do not mean to laugh at your dismay, but you tells funny story. I hope the ogre is a motivational tool and not a self portrait. But oh I did laugh out loud. You can do it!

NO way! I saw the NYC pics and you are nowhere NEAR what you think you are!! Everyone gets a winter 'coat' that goes away once we are active again! Love ya!! You are always so entertaining!

Oh I have to agree about mirrors! And why is it just a few pounds makes us look like that picture?

We all think we are bigger than what we really are.
But I'm sure your heart is even bigger.
Blessings
Robin

You are such a fun person Shirlee,
It's what is inside that counts, hugs.

Oh Shirlee! You are exagerrating, but funny! I feel the same way :)

Oh Shirlee! I thought the exact same thing as Maggee. We saw you in the pictures Shirlee. THAT is NOT you! Tell me who that is though. I know I know that ogre, but can't place the movie. The Hobbit?

For some reason I see that same image when I step out of the shower at least until the steam clears from the mirror and I put on my glasses. After that it doesn't seem quite as bad. Spring will eventually be here and I can get out and maybe lose a few pounds.

I feel your pain! Winter is for gaining weight. Used to be summer was for losing it. Now it is for keeping it. I don't even worry about it anymore.lol