Life around here has been quite busy lately for a number of reasons, & it's going to be even busier these next few weeks, but all things stop for IHSW   : )   I worked as much as I possibly could on Christmas Tea by Plum Street Samplers.  I had hoped to finish it, but I've still got a few snowflakes to take care of.  Despite the drastic color difference between the model photo & what I'm ending up with by following the designer's suggestions, I think I'm going to like it   : ) 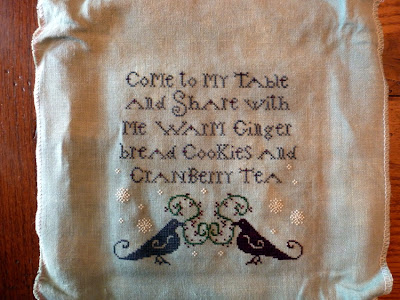 Below is the beginning of a Pine Mountain Designs pillow called Winter 9 Patch.  I started this back in January, I think, & I didn't get very far before I decided I did not like stitching it.  If anyone is interested in stitching it, it's yours   : )   If more than one person is interested, I'll throw names in a hat & pick one out when I wake up & stumble over the computer on Friday morning, April 26.  Just mention in your comment that you'd like to have it.  It has everything included except the 2 winter related charms, but you can easily find replacements for those. 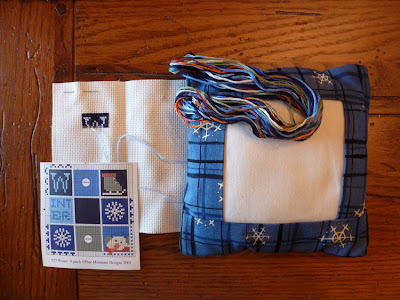 Tha-tha-that's all for this morning!  I'm heading off to Louisville in a few minutes for an appointment with my endodontist to see how my root canal infection surgeries are healing.  I hope I get a good report!

It's a shame you decided you didn't like it, but it happens to all of us. I'm interested in it, but I have a huge stash at the moment, so if anyone is desperately in need of further stash, they're welcome to get priority :)

Hi Shirlee! I have prayed for your endodontic visit this morning. Take care.♥

Oooh, lovely stitching on Christmas Tea!! I really like that colour contrast. Good luck with the dentist/orthodontist xx

Love the verse on Christmas Tea! And the cute birdies. =) I hope your checkup goes well!

Oh Shirlee, your Christmas tea came out wonderful! Have a safe trip!

Your stitching is looking lovely, sounds like you are busy , hows your gardening coming on.
Please count me in for your giveaway, hugs.

Woolie hugs and love to you friend:)

Winter 9 is really cute. Please throw my name in the hat. I did Christmas Tea on a light blue fiddlers with suggested DMC colors and it came out really nice. I hope you like yours when it is done.
Rose K
ChristmasCityStitcher.blogspot.com

Great progress Shirlee. I would love the chance to stitch the Pine Mountain pillow.

Christmas Tea is very cute! I think Winter Nine Patch is also cute and I would be very interested in doing this piece! please put my name in the hat. Thanks!
Happy Stitching
Denise

I like Christmas Tea! I may need to get that one! I would love to be consider for the Pine Mtn pillow. I have stitched a few of these (not the same design) in the past but gave them away as gifts.

Oh Shirlee Christmas Tea is looking lovely I stitched this last christmas as a SAL with Sally and really enjoyed it. I have it on permanent show on my kitchen wall. x

Your stitching is coming along nicely! :)

Shirlee ~ you're doing a wonderful job on Christmas Tea ~ I really like it ~ looking forward to the finish!!!
Hope everything went well with your appt. today.
Prim Blessings
Robin

Oh, how pretty, Shirlee--I really love this one!!

Hope your appointment went well--can't imagine all those visits to the dentist that you've had to deal with over the past year. Ugh!

Ohhhhh...don't mention root canal. I was at the dentist with a strange feeling on a back tooth and he said I might be looking at a root canal. Nooooo, I had one of those many years ago and it was WAY TOO painful!

I hope all goes well for you.

I'm with you on the small blue piece, I'd get bored of the background stitching and break out my felt tip pens again!

Glad to see that other people are happy to rehome it.

I love Christmas Tea and great to see you stitching again. I will pass on your giveaway this time.

Christmas tea is so beautiful! Well done on the finish!! I hope your appointment was okay dear.

Love your Christmas Tea finish!! I have had a project or two that I have started and put down as well.
Hope you are doing well!