I decided yesterday ... or maybe it was the day before ... that I would post no more photos until I took care of posting some long overdue ones.  My shame knows no bounds for not having these photos posted sooner.  My apologies to those connected with them.

First of all, here is a photo of a pillow I got from my friend Trace at Granny Trace Scraps & Squares.  Any wool fabric that meets with her hands finds itself morphed into some amazing creation!  Pumpkins are close to my heart so I am absolutely thrilled to have this   : )   I apologize for the rather "blah" photo & the fact that I did not realize there was a little piece of fuzz on one of the pumpkins when I took it.  Sigh! 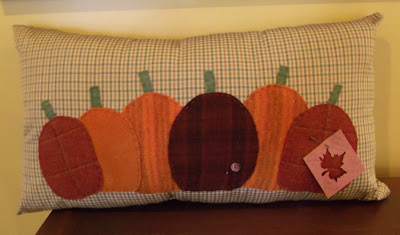 Next is a photo of birthday gifts sent to me by my good friend Angela at Thru Nana's Window.   Yes, my birthday was over a month ago.  My excuse for not posting this photo sooner?  I'm a strange person.  Seriously ... someone will surprise me with a gift & I feel that if I publicly make a big deal out of it that someone who has never received a gift might feel bad.  I would hate to be the cause of anyone feeling bad.  However, I have noticed on several blogs that people post photos all the time of gifts that others send to them.  They don't seem to feel that they might cause hurt feelings by doing so.  Am I wrong to think I might be causing hurt feelings?  I don't know.  I hope I'm not doing that.  I know I enjoy seeing the gifts others receive so I'm hoping others will enjoy seeing the gifts I get. 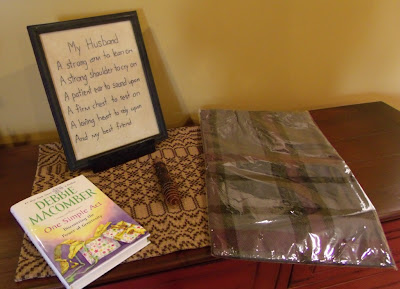 I apologize again for the rather "blah" photo.  Angela had no idea that I have a gray wool coat & that plaid neck scarf will look perfect with it!  Of course our weather has not been cold enough for a neck scarf yet so it's still in the package.  There is a woven coverlet (I love those things), a candle in a holder which I know you can't see very well but it's there in the center of the photo, a stitchery called My Husband which has the most beautiful sentiment, & a Debbie Macomber book called One Simple Act.  I have read some of Debbie's books in the past which were craft/mystery related, but this one is different.  She writes about generosity, being kind to others, forgiveness, etc ... & how these things will enhance your life.  It is very well written & is one of those books that as you are reading it you feel that the author has known you for years & is telling you something that you know is for your own good.  I'm probably not explaining that very well but it's the best I can do with a tummy that is still full of last night's Thanksgiving dinner   : )   It's a marvelous book & I highly recommend it!
And there you have it ... my conscience is soothed.  I can now go on to post more photos without feeling guilty about not posting these ones   : )
I hope you all had a wonderful Thanksgiving day & enjoyed a wonderful meal!  John & I spent a quiet day together watching some holiday DVDs.  Our son called in the morning & our daughter called in the afternoon.  It was nice to talk with both of them.  I also got to talk with my aunt in the morning so all things considered it was like spending a day with family   : )   Our turkey breast this year was out of this world!  It's the first year we ever special ordered our turkey breast from Whole Foods (organic, humanely raised, free range, no additives, etc) & I can't believe the difference between it & all the regular turkey breasts we've had in the past!  And so much meat!  I will have to freeze at least half of it because there's no way we are going to finish eating it before it starts to go bad.  I don't know why I was so surprised by it ... I always buy their beef & chicken & know how great it is.
Today I'll be doing a little of this, a little of that.  John just put an Elvis Presley CD into the player.  A good start to the day   : )

Shirlee~ Lovely gifts.I wouldn't feel like you are making anyone feel bad.With most bloggers the people that recive are givers as well.So you give don't expect and sometimes are surprised.I'm sure anyone with the giving heart would not be sad by seeing someones day made.Hope that made sense.I'm slowly pulling the christmas down today.Just don't feel like putting the tree up yet as we are having unseaonably warm weather till sunday eve.It don't feel like christmas yet..smile..Maybe I need to watch some christmas movies too.Have a great weekend!~Amy

Oh Shirlee - you are one in a wonderful million...only you would fret about making someone feel bad because you got a gift and they didn't. If there are those out there that have hurt feelings because they didn't get a gift, I think they have much larger problems to deal with....I love your wonderful gifts - and love seeing them. That pumpkin pillow is adorable - and those Heirloom Weavers pieces are some of my most favorite things in the world....You are blessed with loving friends (who have awesome taste by the way....) Hope you have a great weekend - they're saying snow is on the way for tomorrow....Smiles & Hugs ~ Robin

Lovely gifts for a lovely person from a lovely lady. I know you will enjoy them.