Last week Sally posted that she & Barb were embarking on a SAL.  The chosen project was LHN's Snow in Love. 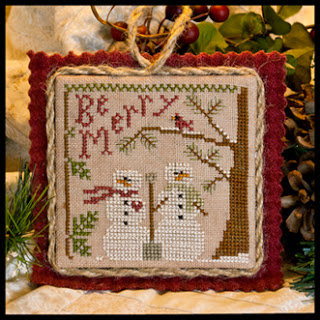 I like several of the LHN ornaments.  Not all of them, mind you.  Some are a bit too "cutesy" for me.  This one, however,  is irresistible.  A snowy winter landscape, snow people, a bird ... what more could anyone want?  I continue to be puzzled at the Be Merry wording on it though.  I would've sworn on my stash of Stacy Nash's that the name of this ornament was Be Merry.  A little joke played by the designer to keep us on our toes I guess   : )   Since I had this ornament kitted up I decided to boldly gate crash Sally & Barb's SAL party.  My plan was to start stitching it as soon as I finished LHN's Winter Forest & I did just that.  I started stitching on Monday & here's where I stopped last night. 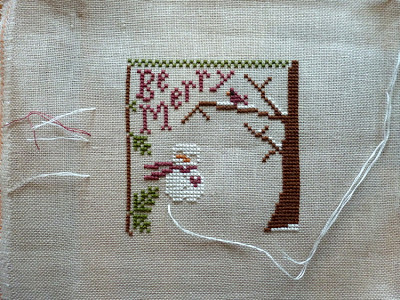 Poor Mrs. Snowman looks a bit like something out of a horror movie with what appears to be big, sunken eyes.  Actually the pattern calls for the eyes to be, heaven help me, colonial knots.  Those big open spaces that are currently in her face are where her rosy cheeks are supposed to be.  The designer wants me to use DMC 3774.  I am out of DMC 3774 & I don't have a LNS where I can just zip out to purchase a skein.  I tried various substitutes without any success & decided to just leave those rosy cheeks blank for now ... but I was looking at other LHN ornament charts this morning (anticipation of the next start) when I found a snow guy with cheeks of DMC 948.  I will give that a try tonight.

Welcome to my new followers & a happy hug & a handful of flying saucers to all my followers! 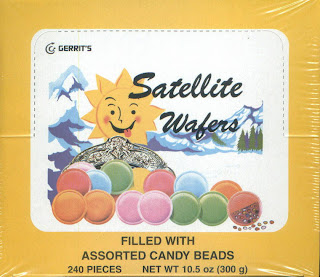 Your 'Be Merry'..I mean ' Snow in Love' is looking good. I too love this pattern. I love you since of humor, I jiggled through your whole post.

That is a very cute ornament. I have it, but not stitched yet. I see that I missed your birthday post....happy birthday a bit late. Your posted 59th picture doesn't look a thing like you! Enjoy!

Oh, I love your snowpeople SAL and yours is so cute.

Try heading to Wal-mart, they carry DMC floss there now. I hope they have your needed color. :)

Hey Shirlee its lovely. How odd I too thought this was called Be Merry. xx

That design is lovely!! good choice ;)

Your new project looks good, I guess we will all be looking out Christmas patterns, it's a busy time for a woman!!

Very cute snowmen! Your ornament is coming out great. Have a great day!

A snowman in a horror movie, LOL! That cracked me up.
The ornament is looking wonderful!

Wow, Shirlee, I LOVE this pattern as well! Your snowfamily look great! Good luck with stitching it!

Wow you've got a lot done Shirlee and it is gorgeous. I'm loving stitching this and so glad you decided to join Barb and I.

Great SAL start, why not use tiny beads for the eye's.Just a thought.