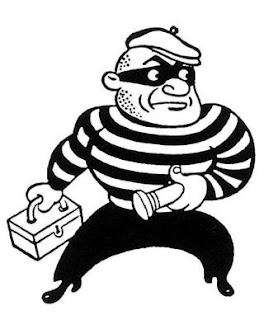 I've lived for 61 years & have never had one of these guys come to my home ... until now.  We are living in a "high-end neighborhood."  Our neighbors drive Porches & Mercedes & BMWs.  There are no shady characters roaming around.  People leave their garages open for hour at a time. We've been doing the same.

About an hour ago, John & I went into the garage & I immediately noticed an empty spot where we keep our tool box.  A big yellow plastic tool box that we've had since the kids were little over 27 years ago.  Among other things, it held some old wrenches & screwdrivers my dad gave us when we moved into our first home in Tennessee.  It also held a brand new set of screwdrivers, still sealed in their package, that I bought my dad for Christmas a couple years before he passed away.  He said they were too nice to use.  After he died, I found them in his tool shed & brought them home.

The tool box was pretty beat up & filthy to boot. I had wanted to give it a good scrubbing & clean out before we moved but there just wasn't enough time.  I thought I'd do it here when things settled down.

I cannot imagine any of our neighbors walking into our garage & taking this cheap, crappy box of beat up tools.  Wouldn't a thief steal something nice looking?  Something worth money?

I filed a police report but it's doubtful we will ever see the box or the tools again.  The tools won't be hard to replace.  Neither will the box.  But the stuff my dad gave me ... the set of screwdrivers that were too nice for him to use ... the loss of those things breaks my heart.

Oh, I am so sorry this happened to you all. Recently, someone broke in to my truck in my own carport. Why would someone do that, esp. when it is a 1999 old model? Seems that no one can feel safe, even on their own property.

Sorry, doesn't it want you to spit nails. Why do people do things like that. I so want to go back to the days of "The Waltons", were no doors were locked or you didn't have to look to see who was knocking before answering the door.

That is so awful---so sorry that this has happened!!

I'm so sorry Shirlee.
I doubt it was anyone in the neighborhood.
Thugs drive around looking for nice homes to steal from. :(
Marilyn

Oh no! Sorry to hear this. Some people are plain awful. Hugs xx

Oh no ... having been a victim of a burglary at home myself, I know the pain you are going through.
{{hugs}}

Oh, Shirlee, what a shame! I am so sorry that this has happened to you and John. lots of hugs, Kaye

Oh I am sorry to hear of this Shirlee. How very sad.

I am so sorry, Shirlee. How awful! I am very relieved that you and John weren't physically hurt.

Sorry to hear about the theft. Seems there are thieves everywhere and even though we live in a rural area, we still keep everything locked. After living in the Chicago area, it's just habit to always lock everything.

I'm so sorry to hear this. Not a good start to your stay here.

what is this world coming to when you can't leave your garage open and people walk in and steal from you. I hope the police get whoever did this and you get all your tools back. I am sending you two big hugs and hope this dose not happen again. lynda ruth

So sorry to hear this Shirlee! Very sad! love Annette

Shirlee I am so sad to hear that someone stole from you! The loss of your Dad's things is awful the rest can be replaced. Big hugs my friend! Jen

Oh Shirlee, this just makes me cry, both for the heart break of someone doing something so yucky to you, and for the loss of something that holds so many memories for you guys...especially your Dad's tools. Since I lost my Dad even little things of his mean so much more :/
Hugs and I pray that you find your tools, that some friendly neighbor just happened to borrow them and brings them back...
Ma

Oh okay--I am reading blogs randomly here... This stinks! But maybe the police will find them, with your tool box and contents. It could happen... Hugs again!