Good Monday morning!!!  I am having a bit of trouble this morning because I feel like it's Sunday.  I don't know why.  The last few days have actually been sort of "confused" in a way with me thinking it's a different day than it actually is.  Don't know what's up with that   : )

I will start off with my IHSW report.  Last night I finished stitching the project I was working on but I can't show it to you because it's an exchange gift.  Tonight I will start something new & it is probably going to be one of these Prairie Schooler Santas from their Santa & Friends chart ... 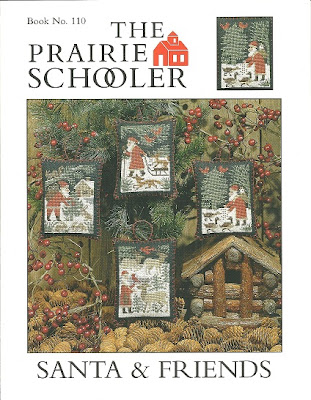 ... or one of these designs from their Starry Night chart. 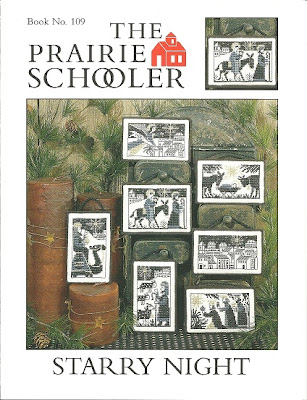 Decisions, decisions   : )
I am now going to share a few things with you that are from my past stitching lives.  Initially I thought I had sold or thrown away or given away anything cross stitch related in the bout of insanity ending my Stitching Life #2.  However, I was greatly pleased to find that I did hold on to a few things.  Now ... this first one I knew I held on to because I had it professionally framed & it has been hanging on my walls since the mid 2000s although I finished stitching it back in 1987.  I have no idea what the name of the chart is because back then I'd stitch something & then figure I'd never stitch it again so why keep the chart.  I apologize for the reflections in the glass.  I have no idea how to avoid them.  Also I do wonder why when I take a photo of something hanging on a wall it oftentimes looks rather curved.  Any ideas? 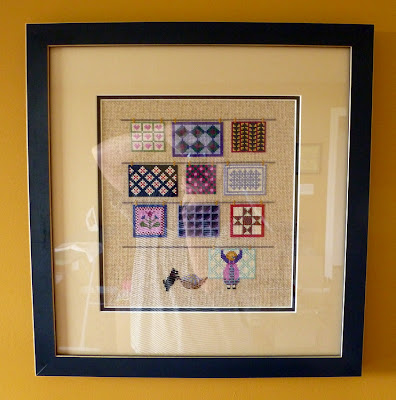 This is also an old finish that I kept ... a personalized chatelaine   : )   I've never used it but I thought it was wonderful when I saw the chart featured in a magazine.  This is from Stitching Life #1. And here are some old UFOs.  The first two are from Stitching Life #2.  This first one is, I think, from a Shepherd's Bush chart which is long gone.  There were 4 different charts (all separate), each with a button decoration, each stitched on burlap using pearl cotton.  This project will probably remain unfinished unless I can find the button that goes with it. 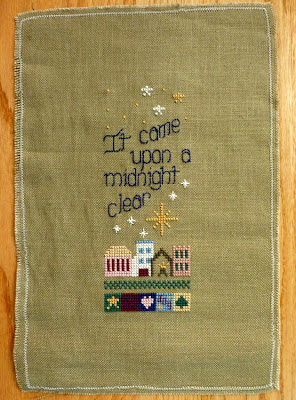 I have no idea who the designer is for this next design but it is an ornament which just needs to be made into one   : ) 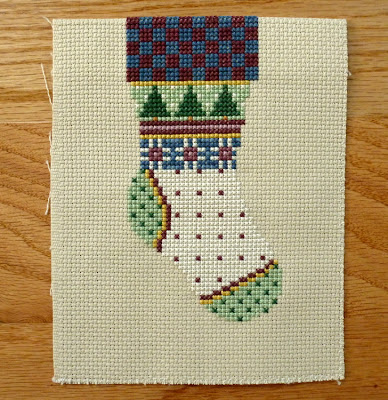 This next UFO is my oldest one (from Stitching Life #1) & as you can see I didn't get too far on it!  I am guessing that I started stitching it in early 1982 which would've been when I was pregnant with our son.  I apparently ran into some trouble early on because I can see where I frogged a couple lines of stitches.  What happened next is anyone's guess.  I know I was thrilled when I saw this kit because my pet name for my husband has always been Bear so our son naturally became Little Bear. 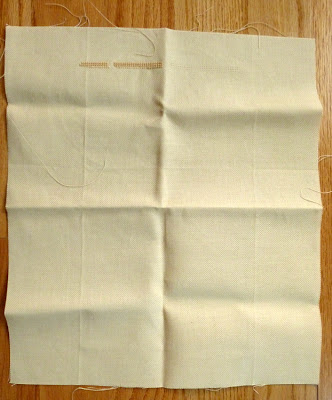 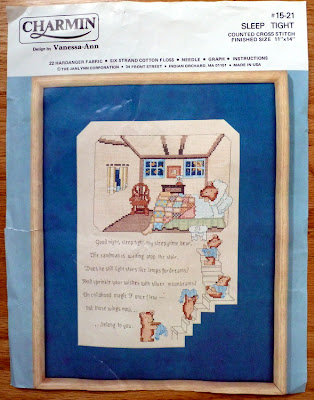 It's a really cute design with a cute poem.  Since I ended up not going any further with it I remember packing it away thinking I would stitch it for our future grandson when Matt got married.  Strangely enough Matt said when he was a little boy that he was never going to get married.  He's going to be 30 years old next month & still sticks to that decision.  I keep holding on to the kit though ... just in case   : )
And finally here is the new stuff.  I have seen way too many people posting their stitching of The Shores of Hawk Run Hollow recently.  It's a breathtaking piece.  I resisted as long as I could but the influence became too great & I had to purchase the chart.  It will be quite an undertaking but quite a masterpiece in the end. 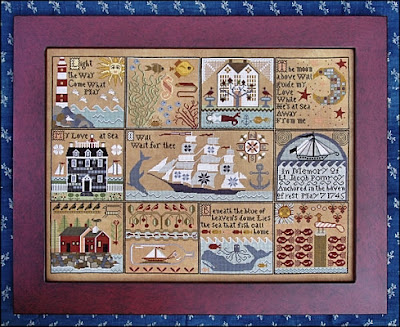 While searching for Shores I came across another Carriage House Samplings chart which I had not seen before & I determined it to be a must have ... Christmas at Hawk Run Hollow.  A nice little town this Hawk Run Hollow.  There are lots of charts available depicting various aspects of the town at various times of the year.  This again will be quite an undertaking but quite impressive when finished. 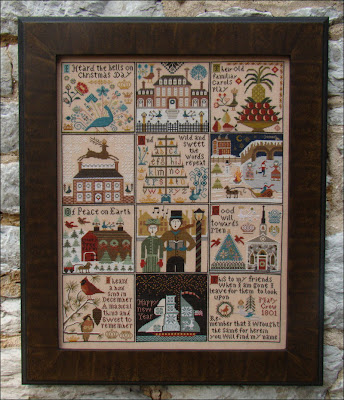 And lastly here is a Carriage House Samplings design that I've had my eye on for quite some time ... Sarah Talbot 1787.  Something about it just calls to me   : ) 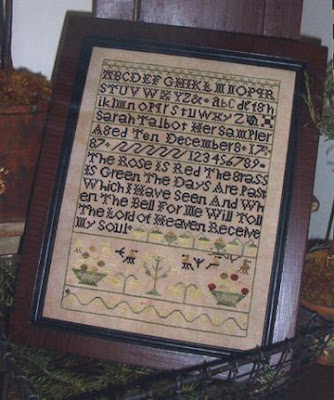 And th-th-th-that's all folks!  I hope you have enjoyed your visit to a bit of my past, present, & future stitching   : )   Now I should go do something house sale related or at least clean or dust something but I have no idea what I'm going to do.  Today is supposed to be the first day of my 28-day anti-inflammation course prescribed by my doctor which involves a very restricted diet along with these shake-like things to drink but gosh-golly-gee, there are still goodies here!  Ah well, maybe tomorrow   : )

I loved your post! I'm sure you enjoyed the memories.these designs brought. It's so wonderful to see.what someone has been working on and why or at which stage they abandoned a project.,guess I should go find mine too:-) you have bought a few beautiful samplers, but lots stitching work ahead!

Your post today is great. It'w lovely to look at your WIPs and finishes through the years.

Your new charts are great!

Your new charts are lovely x

Snap with Hawk Run's.I recently bought the same ones.

Enjoyed your trip down memory lane.I have finished pieces,but not framed done for DS when he was a toddler and hes all grown up now.

I always think its so much fun to look back on the projects we did when we first started stitching.

Of all your past works I like the first one the best. Love the stitched quilts being put on the line to dry.

Great stuff you've got there Shirlee. Much work to be done huh? Stitchwise and housewise I guess. I feel for you. I am NO GOOD at food deprivation. I am currently eating way to much leftover Confirmation cake. :)Good luck with that!♥

Evalina, This and that...

Oh Shirlee, as my grandpa would say, "You are a stitcher from stitchersville". You do beautiful work.

I like Sarah! I considered doing Christmas at Hawk as individual ornaments instead of a large framed piece but I never did purchase it. One of my old 1st stitched pieces was very similar to your quilt design. I had two finishes of quilt designs on a line, maybe even from the same designer. They are no longer with us! Enjoy those shake-like drinks and I hope you feel better soon.

Wonderful past and present creations Shirlee. It's always fun to see what we used to stitch compared to what we enjoy now.
Love the new designs you've found ~ I really love the sampler (the last one!)
Happy Stitchin!!!
Prim Blessings
Robin

Good Morning Shirlee!
I think the upcoming holiday is throwing off everyone's weekly clock.
I love posts like this. I love seeing what we were stitching way back when and the pieces that we love and have shared our home for many years.
I might have to do a post like this.
i hope you get some stitching time today!

Such fun going down memory lane with you, Shirley, I, too, stitched the one with the quilts and the little girl with her Scottie. Never framed it--I really should dig it out and do something with it. I also stitched Christmas at HRH in 2010...and--you guessed it--still don't have it framed! I am the worst at getting larger things in frames... No problem with small finishes, but those large ones haunt me :)

Hope all is going well with your house preparations...June will be here soon! Good luck!!

Hi Shirlee! When I read your post, I wondered if you had visited my blog to see my progress on Shores of Hawks Run Hollow... (hope so.. :) I have also stitched the Christmas one. I will be glad to have Shores done tho, I am eagerly looking forward to stitching some other projects...

Lovely post Shirlee, love all your old stitching, and also love your new charts the first two are beautiful looking forward to watching them grow. Hugs.

STOP IT!!! You're making me feel guilty about that cross-stiched Christmas stocking I started for Little Crow before he was even born and never finished. Tucked away (somewhere) and forgotten. And if I can get over that, then I'm on to "replacement guilt" and the hooked stocking for him I haven't even started yet..... Grrr....

But, Ohhhhh....I'm loving Sarah Talbot something fierce!!! Those Hawk Run designs are beautiful too - but, yikes! that would take me several lifetimes!! Are you nutty woman or what?!! ;o)

Wow....Was I really this far behind on your blog??? Sorry my friend.....and sorry for all the overdue comments that will make you wonder what I'm talking about. I'll try to be better.....