When we were in Lexington the other day I visited Michael's while John spent his time at Best Buy which is sort of next door to Michael's (there's a Marshall's in between the two).  He found 4 DVDs to bring home & I found these! 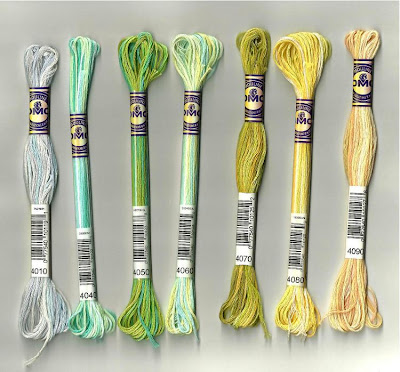 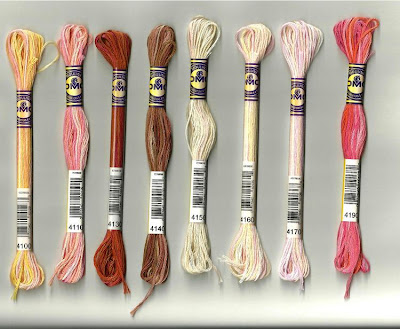 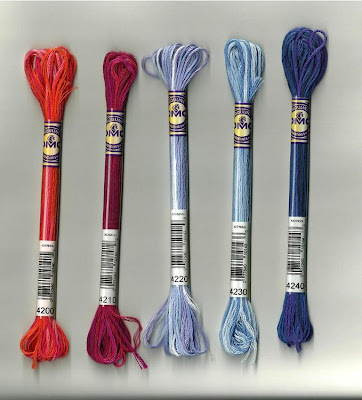 "Hand dyed" DMC threads!  Aren't they gorgeous though!  I don't know if they are new on the market or just new to me but I have never seen them before & I fell in love   : )   I know I'm missing a couple of the colorways & I will look for them when we go back there next week.
I think DMC gets a bum rap sometimes.  It seems a lot of stitchers began to relegate it to the lower end of the desirable floss ladder when the designer flosses hit the market (GAST, WDW, etc).  I don't know why.  I think it's a great floss, easily accessible, doesn't cost an arm & a leg, & probably 90% of the time I will choose to use it rather than the designer stuff.  The only type of floss that might trump it for some projects, like special samplers, would be silk floss ... IMO   : )
I'd like to give you an update on the garage cleaning but I never made it out there yesterday.  Believe it or not, it was "too cold" ... lol!  The temperature reached the mid 60s but the garage is in the shade most of the day & it stays pretty cool in there unless the outside temps get to be around 80.  The temp today is predicted to be 75 ... close enough ... so I will definitely be heading out there soon & picking up where I left off a couple weeks ago.  I will also take care of the weed killing.  Wish you were here   : )

Watch out weeds!! I love DMC. Do you know I have to date never stitched with anything else? I know, hard to believe. I found those flosses too. But not all of those you found. Lucky. We have a small JoAnn 2 minutes from our home. So this one has none. But I have been looking for more of those when I go elsewhere. Now I know for sure there are more. :) Thanks!

Colors of hand dyed DMC threads are like a call-bell for stitching. Love the colors indeed.

Wish you a great weekend.

I love these DMC threads I have a few and I'm waiting for my ONS to get them in stock.

I agree DMC is great!

These are colours to dye for! Hand-dyed DMC? Have to go to the shop here in Lisbon, to see if we portuguese are lucky enough to have them!
Good garage cleanings, and an excelent weekend!
Hugs

I like DMC, especially for specific designers (like Prairie Schooler) that call for them. The only reason I prefer the designer threads is for the color variegation which makes the large areas more interesting. I have used to DMC hand-dyed before too though and like them just as well.

I probably use DMC 75% of the time. Unless the design really looks better with the over dyed. The other threads are gorgeous, but I just like the affordability and accessibility of DMC. I do have some of the DMC variegated threads. The red color works great on some solid colored Christmas ornies.

I, too, like DMC - the old reliable...and often use it cross-stitching....but for punching, I really prefer Valdani....Although I can achieve a variegated look by blending several DMC colors together, I love the convenience of having the floss already in 3 strands, and having it on a ball so I'm not constantly re-loading my punch needle. Fun new colors though....Whatcha gonna make with them? Smiles & Hugs ~ Robin

I'm with you boo boo. DMC it is. Don't want the shine, and certainly not the color bleeding when aging the piece. I'm sure the expensive silks and such look beautiful, but not neccesary on the style I stitch.

Pretty new threads vs 4 DVD's....I think you got the better deal Shirlee.You picked out some beauties!

I like DMC too. The "hand-dyed" newness has worn off for me and you are right that it is such a good value!

Some great coloured threads you got there! I always use dmc too, as they are so easy to get - not to mention a much better price!

i've never seen them either.i guess i'll have to check it out. denise

Helloo :) I use the DMC variations as we call them over here for things like biscornu's etc ... they are slightly stronger blocks of colour changes than the hand dyes of gast and cc etc so make a great statement ...
good luck with your house decision as well.... just catching up again ...lol
love mouse xxxx

Lovely colours. I use DMC a lot - it is often hard to get the more specialty threads here in Australia and they are very expensive.

We've had the colours in the UK for a little while, not sure how long but at least 18months as I used them on Bluebeard's Mermaid instead of the expensive hand-dyeds.

I love 4215, there's a project on my latest blog post where I used it, it's a pink/violet/blue combo.

Looking forward to seeing what you will stitch with these.

the colors are lovely, I don't think I've seen them here. I also use DMC a lot, but given the price of a skein of DMC here, I can easily order hand-dyed floss from the US:-)

Not new but beautiful indeed! ;)
Dmc color variations pallete has 36 colors, from time to time they add a few new :) if you're amazed just looking at them, you need to start stitching! Looks really pretty :)
I love dmc too :D

those are so pretty! I particularly love the colours in the first photo. I've grown up stitching with DMC threads so I love them. :)

Yes Shirlee I am with you there I will always use DMC first if I can.