It seems like it's been a while since I posted much in the way of stitchy stuff.  I will post some today, but first I want to share these photos of some baby birds in a small nest located in a very small Japanese maple near our back porch. 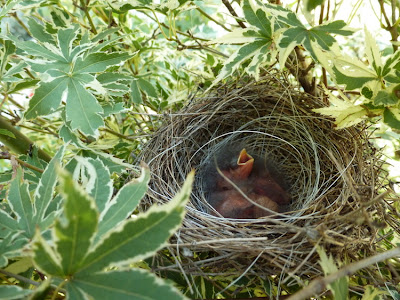 I know you can't see them very well, but there are 3 babies.  When I saw the eggs in the nest, I couldn't believe it.  They were spotted blue & were smaller than jellybeans! I couldn't imagine anything growing inside them, but here they are   : )   It's hard to tell how really small the nest & the baby birds are from the photo itself.  This is a photo of the tree, but it's still difficult to get the concept.  The tree itself comes up to about my shoulders. 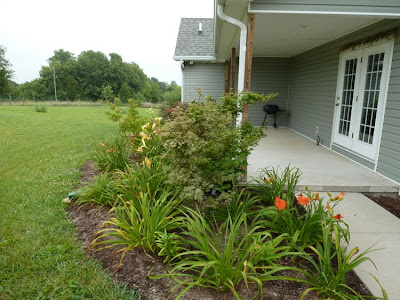 I'm also going to share another daylily photo. As you can see in the above photo, many of the daylilies are no longer blooming, but this one ... which I've shown you before ... had a much deeper color to it than in the last photo I shared so I decided to show it to you again   : ) 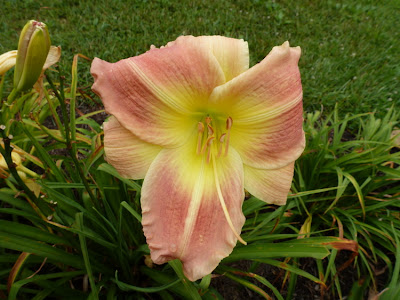 I was in a real stitching funk for a while thanks to Shepherd's Bush & their Merry Merry Be kit without enough thread to finish the design.  I thought I might be able to make something out of it despite there not being enough red thread in the kit, but as I literally forced myself to continue along, I discovered there was also not enough light green thread & the dark green thread seems to be leaning the same way.  I just can't stand looking at it anymore.  I've decided that I have 4 ways to handle this. 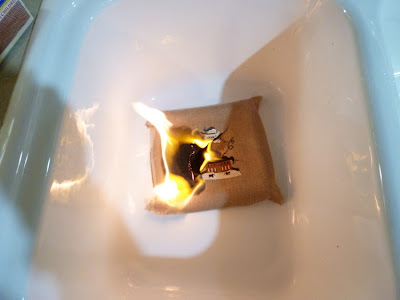 2.  Send it to the local shooting range for target practice. 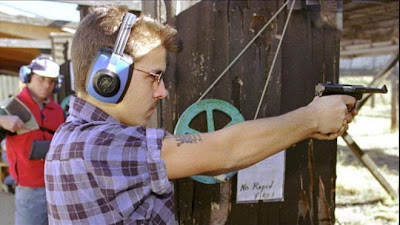 3  Send it back to Shepherd's Bush telling them exactly what I think about their kit assembling practices.

4.  Give it to someone who wants it for God knows what reason. 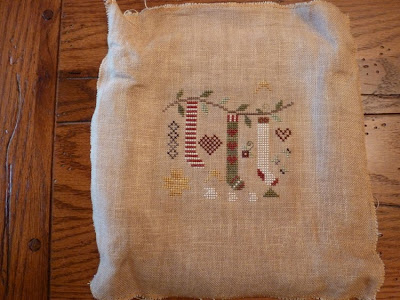 If anyone is keen on #4, leave a comment here & tell me.  If more than 1 person is interested in having this kit, knowing that there is no red & not enough green threads to complete it, I will toss the names in a bowl & draw one on I don't know ... let's say Friday, August 9.  You'll get whatever threads remain, the kit photo, the buttons, & the trim along with the pattern & instructions.  Best of luck to any brave souls who choose this option.

This SB kit almost put me off stitching, but I have started the Lizzie*Kate Friends Are Like Angels traveling pattern & hope to finish it sometime this week so it can travel to someone else.  I'll post when I've finished stitching it & ask at that time if anyone wants to stitch it next.

Not much new on the medical front.  The increase in dosage of the old heart medication & the addition of the new one isn't working well.  I fear the ablation is the next step but I will know more when I talk with the doctor again.  We are not busy packing so obviously we have not yet sold the house so nothing is new on that front either.

I hope you all have been having a great weekend!  The weather here almost seems fall like at times.  Some of our trees are even changing color!  Happy dance, happy dance ... winter is just around the corner   : )

How lovely to watch new life emerging in the nest, so wonderful.

I hope the SB can find a new home!

What cute little birds how sweet.
Yes please pop my name in the hat , i love SB .
Hope you are having a good day hugs.

Send it to me, my bladder couldn't stand any of the other options!!

Shirlee I hope the babies make it. Our raccoons pull nests down, stick their legs into the houses, and believe it or not - chipmunks actually steal babies. I couldn't believe it so I looked online. True! My cousin lost an entire nest of cardinals to them. I can't believe the house isn't sold with all the beautiful views and land!

Do you know what kind of birds they are?
It has been in the 50's at night here. So nice to sleep with the windows open.

Love your Robin babies! One of them heard you and thought you might have some yums! I am so sorry about your SB kit. I love SB but have had the same problem and never called them. Maybe someone should! Please add my name to the SB drawing. I have lots of threads so I am sure I have something to make it work! Thank you for such a generous gift and passing it on instead of destroying it.

Oh Shirlee. I am keeping you in my thoughts and hoping that you are in the best of health again soon.
I hate that about the SB kit. It totally pisses me off when there is not enough floss in a kit to finish it. Sheesh.

i would love to have it. denise

Great pic of the baby birdies.

So sorry to hear that you haven't sold your house yet. We put our condo on the market ... two showings but no offers. DRATS

What a fabulous picture of those baby birds. I hate that the Bush piece was so frustrating for you. Maybe someone will give it a good home so you don't have to "pull a Shirlee". I am keeping you in my thoughts and prayers my friend. Oh, by the way the pics on your previous post are great. Congratulations for sticking with it. Send some of that willpower my way, would you?

You got a perfect picture of those babies! What little miracles to come from jelly bean eggs! I would be willing to try the SB pattern.
I am so not ready for fall. We haven't really had much summer yet :(

I will give it a good home! :)
Marilyn

Those birds are so cute and right up near to your door, what fun to watch the parents feeding them.. we watched our little blue tits feeding their brood as we have a nesting box. And as for your SB pattern if you write to SB they will send you more threads I think. That what is written on most good designer charts, but whats wrong with matching up the colours?? And I read back and wow you can see you have lost that weight, something I am trying to do!
Happy days
Chris x

Oooh those baby birds are so sweet!! Cross stitch wise, I'd opt for N° 3 & contact the company explaining the situation. They might send you extra floss free of charge :) Otherwise, I hope it finds a new home soon :)

Hi SHirlee, you have done really well with your weight loss and I am getting lighter too. Oh dear SB has done it again. I had a kit that I had that problem with ,phoned my supplier and she told SB, result was some more in the post from SB itself from the US to UK. I cannot understand why they do not put more than enough in as it is so frustrating being short (I know cos I am not tall)lol. Love the birdies hope they all survive. Hugs Oh dont need the chart as I have already stitched that one ,with right amount of thread lol.

The photo of the baby birds is so cute! Hope they make it. I also would call Shepherd's Bush. I would think they would send you more floss to complete the project. I do think it's a cute design.

I also am trying to lose some weight. Not easy tho, is it?!

Take care and hope your heart issues sort themselves out soon.

love the picture of the tiny birds, do take care of yourself.
hilarious options, as much as I'd like to see you do another Shirlee, I guess I'll volunteer for the kit adoption. I always change threads anyways ;)

So sorry to read about the SB problems, Shirlee--would you believe I've never stitched one of their designs? I hope someone can rescue it and find a way to make it work for them...

Love the birdy babies--how sweet! Out of all the nests that we had around here this year, none of them ended up with babies :(

Looks like you have a couple takers on the SB. I was going to ask for it just because I couldn't stand the thought of it going up in smoke or being shot at.

Love seeing the baby birds and hope they survive.

We've had some fall-like weather here too, but I'm not looking forward to fall and winter at all.

Sending hugs and keeping you in my prayers.

I really like option #2 :) I've wanted to do that one with many of my projects! I tend to avoid kits entirely for this reason alone and I feel your pain.

My Aunt in the UK has had similar problems with her heart and she has some sort of device put in (attached to it) to shock it when it is beating too fast.....is that what abalation is? Will have to read more about it, as I have the exact same heart rythym too but mine only happens occassionally and I was told it was nothing to worry about. HA! Right?

I hope they can get you feeling better soon.

I'm a big fan of burning things in the fire pit outside. Heh. Never a stitchy thing but certainly no-longer-useful furniture that has been broken down into burnable bits. I have had troubles with their kits a couple times but never that bad. Wow. That ain't right.

I hope you will take the time to contact SB, as this error should be brought to their attention ...they are very accommodating and will send the needed threads to you.
Busy Hands...Happy Heart
Patricia

I love the little bird picture...that is precious.

Sorry to hear that you are still struggling with the SB kit. You can put my name in the hat and if I win I am going to stitch it FOR YOU and send it back as an ornament for your tree! :)

Sorry that the new med is not working well. UGH!

Don't stress over the home sale...The house will sell when the right person walks through. Fingers crossed that will be soon.

Hi to Pearl and have a great week my friend.

Sweet little birds - the house will sell, you just need the right person. Keep the faith!

So sweet to see the baby birds! Hope you find a good home for the piece ~ love your options though!
Sending prayers for your health and home....

There's really nothing worse than working on a project you hate, is there? :( I've never stitched an SB before, though I'd love to try one - stick my name in please! :) Hope your heart medication sorts itself out. This whole thing sounds like a real shenanigans :(

Hi Shirlee
Please add my name to the hat. I continue to offer prayers for your improved health.
Busy Hands...Happy Heart
Patricia

Such sweet babies ~ one of my favorites to take pics of.
Sorry to hear about your stitchin' woes ~ nothings worse than not getting enough supplies in a kit.
Hope you have a wonderful and joyful weekend!
Prim Blessings
Robin