It's been a not-so-great couple of days ... more so mentally than physically.  I've been feeling really down & so I've been trying to keep myself busy.  I did finish stitching the second pumpkins pinkeep I was working on.  I have also been making progress with my ornaments for the Christmas ornament exchange I'm hostessing.  On Thursday I decided to start a new cross stitch project but ran into a snag or two, asked for help from an online group & then set it aside.  Last night in it's place I decided to work on a small alphabet sampler.  When I decide to work on a project, whatever it is, I am extremely careful (anal) about it.  With cross stitch I take my time to make sure none of my threads get twisted & that the back of my piece looks as good as the front.  With this alphabet sampler I was careful as always & checked the back at various times to make sure it looked okay but still, when I was just about finished with a border row I checked the back & there was a big knot on about the 30th stitch.  I was on the 90th.  I will need to take out those stitches & redo them but I decided to leave them as they are for now & start on the main sampler design because I need to do a bit of tweaking with the original design.  This will include stitching the date as 2011 instead of 1986 & replacing the designer's initials with my own. 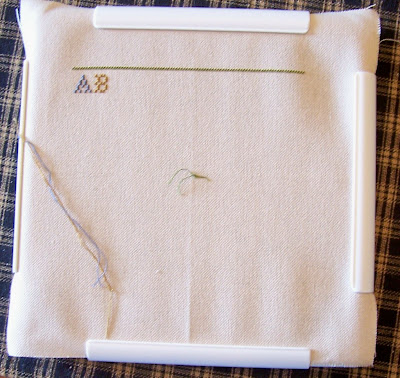 I have always thought that samplers were a way for a young girl to practice her stitches & learn her letters/numbers.  I never thought there was any more to it than that.  I do remember seeing paintings & photographs of grown women sitting & stitching samplers but I never really thought much about it.  Certainly they knew their letters & numbers & their stitching was undoubtedly perfected in their youth.  I guess I just felt they were "making something pretty" to decorate their homes or to give as gifts.  I'm sure many of them were.  However, this morning I discovered something else about this art form which appears to be this ...

The motifs on a sampler can actually mean something!  When a woman stitched a sampler, it could tell the story of where she was born, where she has lived, if she's been married or not, if she has any children, if there were any deaths in her family, etc.  A sampler could also represent things that were important to her ... her faith for example ... or it could represent qualities she wanted to have in her own life (hope, health, or wisdom).  This discovery has just about floored me!  How could I have been involved with crafting for almost all my life & spend 57 years on this earth without ever knowing this!  It's a pretty cool discovery   : )

I am looking out the window right now at our front yard which looks like a wheat field.  There is, in fact, red wheat growing amongst the grass & there are weeds "as high as an elephant's eye."  Well, maybe not that high but definitely as high as an elephant's knees!  It's been 3-1/2 weeks since our riding mower went into the shop.  I was mowing & John came outside to give me a bottle of water.  I drove over toward him & turned off the mower.  When I turned it off he said a large flame shot out of the front of the mower.  That didn't sound good.  We opened the mower hood & found what appeared to be a cracked muffler.  I made several calls & found out the flame was being caused by the mower backfiring & it wasn't dangerous so I finished mowing.  Then I called Lowes (where we bought the mower along with a 3-year extended warrant, thank goodness) & scheduled with them for repair.  They contacted a service center in Lexington (closest one) & 2 days later they came & took away the mower.  After 2 weeks I called Lowes to tell them we had not heard anything from the service center & to inquire on the status of our mower.  I told them our grass is getting pretty high.  They put me on hold & called the service center who told them they hadn't even touched the mower yet!  Grrrrr!!!  This happened the last time we needed service as well.  Lowes offered to have the mower transferred to another service center & we told them we thought that was a good idea.  This was last Friday (8/5) & they said they wouldn't be able to get things scheduled until Monday.  Wouldn't you know it ... on Monday they called & said "The service center said they will be working on your mower this week!  Margaret will give you a call to let you know the status."  Here it is Saturday & Margaret has not called.  We can't wait much longer.  I'm going to have to try to find a mower to rent or find someone to pay to do the mowing or we're going to need a combine.

What is it with these places? Are they really this incompetent? I am sorry you have had more than your fair share of troubles.
I LOVE the cross stitching you are doing! I still have yet to try it, I plan to sometime hopefully.
I just think they are beautiful.
I hope that you will relax and stitch the day away. Me~ I have to work and it's a full moon! Blah~ meano people during full moons!
Hugs,
Renee

Hi Shirlee,
I hope your day is a little brighter today!
Your stitching so far is nice. I haven't had any time to stitch lately. I'm still looking for the supplies I need. Tomorrow is a new day!
Have you had a chance to go over to With Thy Needle and Thread blog? I think you would love it!
Sorry you are having so much trouble with your mower. Be persistant!
Try to have a great day!
Prim Blessings
Robin