Cares Melt When You Kneel In Your Garden

I came across this gardening quote recently & was really impressed with it.  Unfortunately there is no reference given for who said it but I think they knew what they were talking about.  I wish I did a decent job of stitchery.  Wouldn't it make a wonderful sampler or pillow?

I spent the morning gardening.  It was a treasure of a morning after many days of temperatures way too high for this time of year.  It was overcast so no sun was shining down whatsoever & there was a nice breeze blowing the entire time.  I took stock of what we have remaining to plant & chose a few things that wouldn't kill me ... lol!  Let me explain ... John had a rough night so he slept until about noon which meant I was totally on my own out there.  It was nice though.  Sometimes solitude is a good thing.  The first thing I tackled was the Clematis.  I really needed to get that in the ground so I chose a spot for it against the back of the house but at the corner where it will get sun in the mornings & then again in the late afternoon.  The tag said that it likes full to part sun so hopefully it will like its new home.  I then took 3 of the pretty little purple ground covers I bought last week (Whitley's Speedwell) & planted them so that they will shield the Clematis' roots if the sun gets too hot.  Next I choose a cheery yellow Sundrops plant.  I needed to add something alongside the Clematis & that seemed just perfect.  The little bees sure do like it!  They were trying to land on the flowers while I was trying to plant it!  I already had what I think is a Black-Eyed Susan growing in that area but I had an empty space next to it.  For that I chose a Hardy Mum (Hillside Pink Sheffield) that should work well   : ) 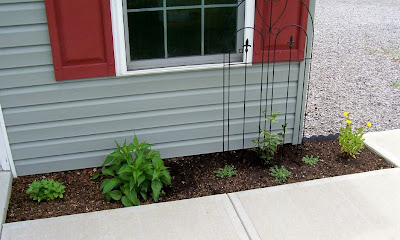 I then went to the other little strip garden against the back of the house.  I have some pink Lilies of the Valley I just planted there as well as 2 ferns recently planted.  When we moved here there were already 2 Hostas & a pretty fern that has various shades of green plus some pink & a little red in it.  I had moved them in that strip last year & was satisfied with where they were except for one of the Hostas.  I moved it to the other side of the hose connection.  It had been planted next to that pretty fern.  In its place & on the other side of the fern I planted Astilbes ... a red one & a pink one. 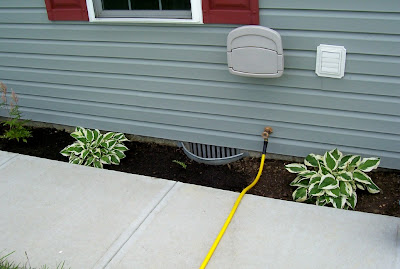 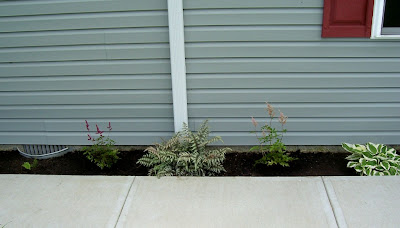 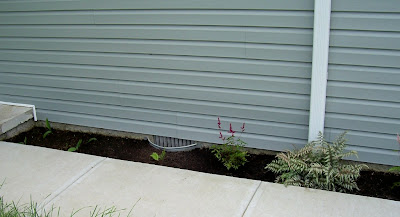 I then decided to go around to the side of the house near a gutter drain pipe  It was really a mess there ... full of weeds & the soil is the worst I have ever seen.  Very dry & rocky & yuck!  I dug out all the weeds (I swear some of them were trying to attack me!) & I dug out a lot of that horrible soil but only had 1 bag of topsoil to replace it with.  Looks like another trip to Lowes is in the future   : )   In that space I planted a Pink-A-Boo bush.  Should be very pretty there I think   : ) 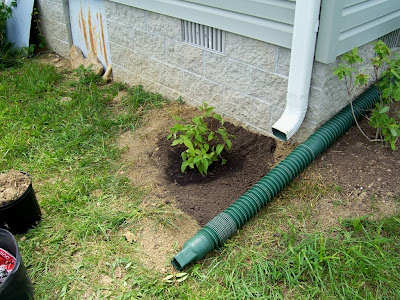 I need to get my new gutter drain attached before it rains!  Per the weather report it doesn't appear I need to be in any rush for that.
Just as an added treat, here is the pot of Zinnias I bought the other day.  I've never seen Zinnias like this before with 2 colors in their petals.  I think they are so pretty!  I didn't know but the tag says that the butterflies enjoy them!  I don't know if I'll put them in the butterfly garden or not.  Probably will because it will need some filler plants before I get all the perennials I want in there   : ) 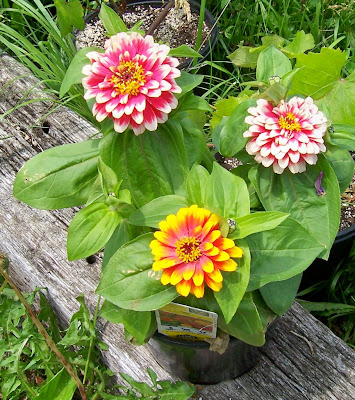 I'm really enjoying browsing through gardening quotes.  Some of them are very meaningful ... & some are very surprising like this one:  "I'm not really a career person.  I'm a gardener, basically."  Know who said that?  George Harrison!  Who would've thought!  But then he appeared to be such a peaceful soul, I can imagine him puttering around in a garden.
Tomorrow the plan is to start the mowing while John finishes preparing my butterfly garden bed.  I will then add the topsoil & organic matter & maybe start the planting.  Can't wait!
I do hope you are all enjoying your day as much as I have been enjoying mine   : )   Thanks for stopping by!

Sounds like you had a very good day Shirlee!
Have a great weekend!
Granny Trace
www.grannytracescrapsandsquares.com

All your TLC will pay off for many years to come. A stitched pillow with the garden quote would be nice on the porch furniture. Blessings!
Lara

I am proud of you girl!
Your clematis will do just beautiful! Good girl for planting the speedwells in front! I love gardening quotes, and yes, George had some amazing gardens! I really do forget it all when I am out there, it's just amazing! I love the zinnias too! Beautiful!
Hugs,
Renee