Of course yesterday turned out to be a good day, thanks to the car dealership owner, after 2 horrendous days of stress, anxiety, & depression, thanks to the car dealership employees I guess you'd say.  On the way back home after getting this mess all straightened out John & I decided to take a drive down this little side road to a town called Gravel Switch.  Now doesn't that just sound like the most wonderful name for a country town???  We had never been to the town this car dealership is in before so we Googled to see what was there & some interesting places in the nearby town of Gravel Switch came up ... one of which sounded like an unbelievable craft shop & the other was an old general store which started life in the 1850s I think it was & was still operated & owned by the same family.  We both had pretty high expectations as we drove to Gravel Switch but that didn't last long.  The amazing craft shop was just the opposite, & the general store was still standing but it looked pretty bad & it was not in operation at all.  The entire area was very run-down.  Still it was a nice drive.

After getting back home we went to the post office to pick up our mail.  I received several packages, some of which I had no idea what was inside.  I do that ... I order things & then forget that I ordered them so sometimes I get quite a surprise when I open something.  Well last night I decided to open these packages & inside one of them was this! 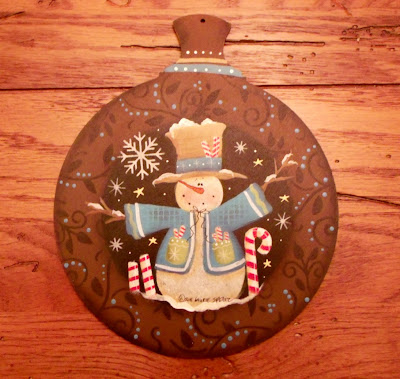 This is a hand painted original by a well known folk artist by the name of Laurie Speltz.  I have not painted for a few years & actually had no idea who Laurie Speltz was.  However, each year I exchange filled Christmas stockings with a friend of mine in North Dakota & on her wish list this year were some stencils from Laurie's site.  I went to the site, bought a few stencils, & that was that.  I don't particularly remember signing up for a chance at anything.  I could have ... I just don't remember.  Or maybe you are automatically entered in a drawing when you order something?  Either way, I was one of 5 winners & this is what I received!  I am still in shock ... lol!  It is quite large measuring 6" in diameter!  It won't fit on my puny trees but I will find a place for it, believe you me   : )   I of course can't share my good fortune with my friend because she will then know she's getting some of the stencils she wanted ... but as soon as she tells me she's opened her stocking goodies then I will direct her to this post   : )

Congrats. on your win Shirlee. It is a very pretty ornament and the painting is wonderful. It would be really cute hanging on an ornament stand under a cloche. I am off to lunch with friends today and then to grocery store to shop for baking supplies. You have a great day.
Angela

What a beautiful ornament. I Love Laurie Speltz's work! I have a few of her patterns and stencils. Congrats on your win!

Congrats on your win!!! The ornament is beautiful. What a great surprise for you!

It's like Christmas when this happens huh hun??? LOL Very cute.

Darling ornament, Shirlee! Congratulations!!! (But gee - I was all geared up for photos of this awesome old general store and the amazing quaint town of Gravel Switch....) ;o) Wishing you a great Tuesday! Smiles & Hugs ~ Robin

Congratulations :) It is beautiful!

Hi Shirlee
Thank you so much for stopping by my blog and your lovely lovely message ~ I'm thrilled to meet you but must apologise to your bank balance for the temptation of the Pine Mountain and SB kits!!!
Your blog is adorable, I feel so warm and festive reading it and looking at your creations ~ I shall have great fun following you.
HAPPY CHRISTMAS
Jane
x
(Buttons & Stitches x x x)

congratulations for the lovely win..ornament is so cute..i love it so much..
big hugs for you xx

Congrats Shirlee on winning that beautiful ornament! So glad that the car problem worked out.Hugs,Jen

Congratulations on your win Shirlee. It is gorgeous.